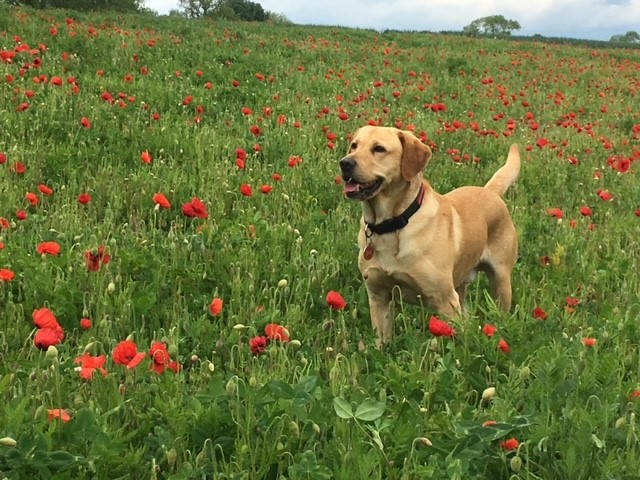 A novel new treatment delivered here at Willows has helped cure a dog who had endured four years of sporadic lameness and limping.

Eight-year-old Labrador Ben first injured himself while chasing a ball when he was just three years old and had never fully recovered – until now.

Thanks to our multi-disciplinary approach and pioneering care, Ben has finally bounced back to his best.

Toby then handed over care to colleagues Jacques Ferreira, an RCVS and European specialist in anaesthesia and analgesia, and veterinary physiotherapist Emma Box, who combined to complete the Labrador’s recovery.

“An examination by Emma and myself confirmed the presence of chronic pain which was secondary to his ongoing elbow osteoarthritis.

“This had caused severe, intermittent left forelimb lameness which was frequently preventing Ben from being able to enjoy his walks.

“We looked at pain relief and control and started Ben on Bedinvetmab which is a monoclonal antibody therapy targeting nerve growth factor, and on Amantadine, a chronic pain medication.

“Bedinvetmab was only launched a year ago and is a novel, highly-selective pain killer which is administered via injection once a month and uses the body’s own immune system to provide pain relief for sore joints.

“Emma supplemented this with a series of exercises and a gradual re-introduction of walking and the combination of treatments worked well.

“By reducing Ben’s pain, we were able to improve his core strength and mobility through the physiotherapy plan and this has enabled Ben to enjoy his walks again.

“We saw a good improvement within 28 days and Ben has maintained and increased his activity levels and can now walk without lameness or limping.”

He said: “I’d recommend Willows without any hesitation. In fact, I’ve already done so with my son, whose own Labrador has been through the same process recently.

“As for Ben, his walking improved to normal within a week. We built him up very carefully, though, as he had lost muscle strength due to the lack of exercise.

“Now he’s doing a total of 100 minutes on average a day, over three walks, with no detrimental effects. There’s not been a single adverse reaction.”