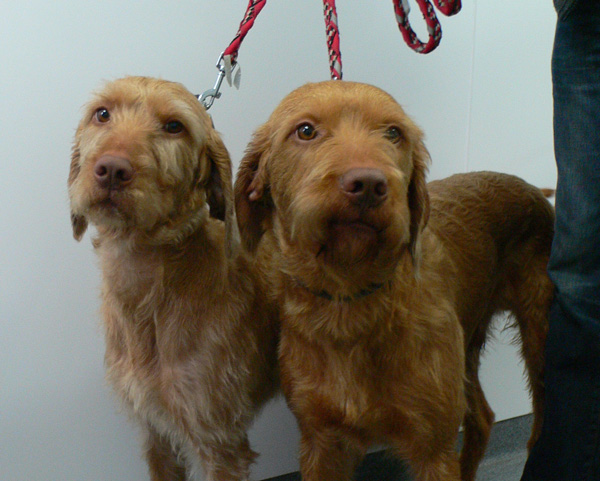 Dave and Skud – Itching to be the first!

Siblings Dave and Skud are 4 year old Hungarian Vizslas, and have been inseparable since birth. It goes without saying that things like walking, playing, eating, and sleeping have always been done together. However, when Dave and Skud reached their first birthday, they started experiencing something altogether new. Unfortunately, this was not something mischievous or fun – instead it was the frustrating and very undesirable issue of itchy skin problems.

Dave particularly suffered from sore, itchy feet, but also had bouts of painful and infected ears, whilst Skud also had sore ears, but tended to come out in spotty rashes all over her body. These skin problems were occurring throughout the year, although both seemed to have worse symptoms in the summer.

Dave and Skud were initially seen by Willows primary care vet, Noella Cooper, who treated the infections and ruled out parasites as a cause of the problems. In addition, Dave also required courses of ear drops to treat his ear infections. As both dogs were suspected of having allergies, Noella also recommended special diet trials to see if a food allergy was responsible for triggering the skin problems – but despite undertaking these measures in both dogs, their skin problems continued.

Dave’s itching was so bad that he was started on a powerful drug called Ciclosporin. This seemed to help, but the dose had to remain quite high to keep him comfortable and stop the infections coming back. Skud’s spotty rashes were being kept at bay with courses of antibiotics, but her owners were very keen for her to avoid needing antibiotics in the long term.

Both Dave and Skud were therefore referred to Willows’ dermatology Specialist Jon Hardy for further investigations of their allergies. After examination and a thorough review of both dogs’ histories, the diagnosis of atopic dermatitis or ‘environmental allergy’ was confirmed. This is an allergic reaction to environmental substances that results in skin disease, and is all too common in UK dogs.

Dave and Skud were both scheduled for intradermal skin testing to identify what they might be allergic to. This is rather like the skin prick-testing performed on the forearm of people with allergies. Both patients were given a light sedative and a small patch of hair was clipped from their chests. A range of purified extracts of substances including dust mites, the pollens of trees, weeds and grasses were then injected into the skin and, after waiting a short period of time, the size of the reaction to each substance injected was then measured.

Intradermal skin test – each bleb is the site where a different purified test allergen, such as pollen or house dust mite, has been injected. The blebs are measured to gauge the degree of sensitivity of the patient to each substance.

Luckily, both Dave and Skud showed positive reactions to only a few substances on intradermal testing, as this means that desensitising vaccine treatment (immunotherapy) can be made up for them to try to treat the problem. Immunotherapy involves an injection course that aims to ‘desensitise’ the body to the allergic substances. Whilst this treatment does not work in every dog with environmental allergy, it can provide a very effective ‘drug free’ way of controlling skin disease. Dave and Skud have become the first dogs at Willows to undergo this type of allergy testing and they are both due to start their vaccine treatments any day now!