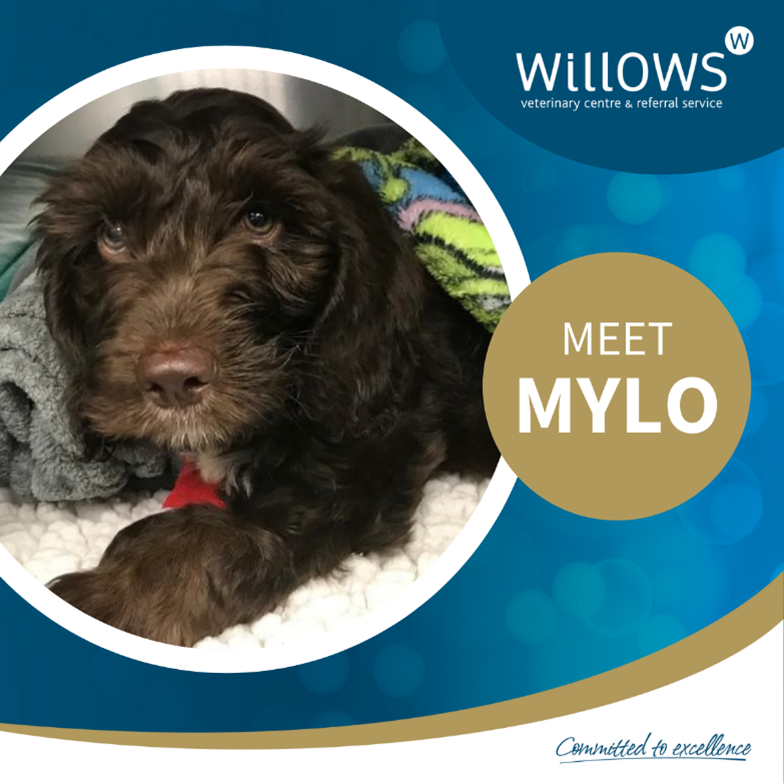 A paralysed puppy that was suffering from a rare life-threatening condition has made a spectacular recovery after 11 days in intensive care and dedicated physiotherapy as part of a truly multidisciplinary approach here at Willows.

Mylo, a two-month-old Sproodle, was admitted to us as an emergency case after becoming paralysed, which included losing the ability to bark, yelp and whimper.

Our Neurologist Resident Rob Clark carried out an examination on Mylo which pointed towards a condition called ‘immune-mediated polyradiculoneuritis’, which was confirmed by a series of complex neurological diagnostic tests.

Rob explained: “Mylo’s own immune system was attacking his nervous system, leaving him unable to move any of his legs or even lift his head.

“I had to prepare Mylo’s owners for the worst, as polyradiculoneuritis can be life-threatening if it progresses to paralysing the nerves which control breathing.

“The other major problem was that there is no specific medical or surgical treatment for polyradiculoneuritis, so Mylo’s recovery now depended on round-the-clock intensive nursing care and physiotherapy.”

Mylo was immediately admitted to our Intensive Care Unit (ICU), where he was closely monitored day and night by our dedicated team.

Rob added: “For patients such as Mylo, we have to watch and wait to see if the nerves start to heal.

Some patients deteriorate and others slowly seem to stabilise and then show signs of improvement.

“The biggest danger was that he may develop secondary complications, such as struggling to breathe or a chest infection, so the ICU team were monitoring Mylo’s vital signs 24/7 and were turning or repositioning him every four hours and propping him upright for any feeding and bathing, as well as playing and interacting with him.

“Another potential complication was that Mylo could suffer long-term mobility issues when he recovered. He was paralysed from the neck down, so he was not moving his legs at all and, as a puppy, he was still in his growing phase.

“Patients who spend so much time without moving can develop a contracture, where the muscles start to contract and pull the legs into a curled-up position, which is irreversible.

“If Mylo did develop a contracture it would mean he wouldn’t be able to walk again and puppies are especially prone to this complication as they are still growing.”

This is where our expert Veterinary Physiotherapist Emma Box became key to ensuring Mylo avoided a contracture and went on to make a complete recovery.

Emma explained: “An exercise programme is essential to prevent a contracture, so I spent a long time massaging and stretching Mylo’s legs and moving his joints for him.

“Then, as Mylo started to recover, we began a course of rehabilitation. Firstly, we started the process of teaching Mylo how to hold normal positions such as sitting and lying.

“We introduced exercises which involved manually positioning Mylo into a lying or sitting position, and slowly taking support away over time.

“Once he could hold these positions independently, you use further exercises to challenge his balance a little more – such as moving a treat from side to side and seeing if he can hold the sit or lie without collapsing to the side.

“These exercises don’t sound that strenuous but for such a tiny puppy recovering from polyradiculoneuritis they are incredibly challenging.

“Gradually were introduced to encourage him to push himself up into a standing position and try to take steps.

“When Mylo finally went home his owners also had a prescribed exercise plan to perform every four hours. They showed incredible tenacity and resilience with his aftercare and, without their efforts, I don’t think Mylo would have made the recovery he did.

“There were a few setbacks initially as we feared that Mylo had developed a contracture, but eventually, after three long months of gruelling rehabilitation at home and countless trips back to Willows, Mylo is now able to explore the exciting world like a puppy once again!”

Another successful outcome for our multidisciplinary team!