Why Should I Bring my Pet to Willows for Diagnosis and Treatment of Oral Tumours?
Willows is one the UKs only referral centres to have full-time Specialists in both the Medical and Surgical of tumour diagnosis and management. This, combined with a multi-disciplinary team approach to the management of pets with oral tumours, enables Willows to provide the best possible levels of care to our patients.
Our Oncology team are fully supported by Specialists in Diagnostic Imaging, Anaesthesia, Emergency and Critical Care, Clinical Nutrition and by our dedicated Interns, Nurses and Clinical support staff who provide care 24 hours a day, 365 days of the year.

Fig 1: A CT scan of the mouth to assess the size and extent of the tumour
How are Oral Tumours Diagnosed?
A diagnosis of cancer is normally made from a tissue biopsy which involves examining a piece of the tumour under a microscope. Additional tests (immunohistochemistry) may also have to be performed to determine what tumour type is present. Samples are usually also taken from the lymph nodes to look for evidence of tumour spread.

Fig 1: A CT scan of the mouth to assess the size and extent of the tumour 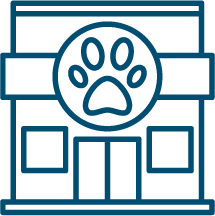 Surgery is used for most oral tumours, as it is the most rapid, efficient and cost-effective way of controlling the tumour in the mouth. For smaller, accessible tumours that have not spread, it offers the potential for complete cure. Many tumours will however invade the underlying bone as such successful removal of the tumour may require removal of the underlying bone. Depending on the size and location of the tumour, this may involve removal of a part or all of the lower jaw bone or a segment of the upper jaw. In the majority of dogs, this procedure is well-tolerated, and although there may be some cosmetic change, dogs continue to eat well after the procedure. Surgery may also be used to remove the local lymph nodes for diagnostic purposes to find out if there is tumour spread, or for therapeutic purposes if tumour spread to the lymph node has been diagnosed by a needle biopsy pre-operatively.


Possible complications following surgery include blood loss, wound breakdown, increased salivation, and difficulty picking up food or toys. Surgery may also result in a cosmetic change, with shortening of the jaw or a defect in the normal contour of the jaw or drift to one side.

Radiotherapy may be used as the primary therapy for certain tumours, such as acanthomatous ameloblastoma, squamous cell carcinoma and malignant melanoma, if the tumour is not suitable for surgery. Radiotherapy may also be used as additional therapy after surgery for certain invasive tumours, such as fibrosarcoma, if surgery cannot be used to remove all of the tumour. Willows does not offer radiotherapy on-site, however a referral can be arranged to the nearest centres which do provide this, which are Southfields Veterinary Centre, Liverpool University and Cambridge University.

Chemotherapy may be used for tumours that have a high potential to spread, such as malignant melanoma and osteosarcoma. This therapy is usually used after surgery, as large masses (greater than 1cm) do not generally respond well to anti-cancer drug therapy. Chemotherapy treatment typically involves giving a high dose of an anti-cancer drug once every three weeks.


Anti-cancer drug therapy may also be used after surgery to remove an invasive tumour, e.g. fibrosarcoma, to try and prevent or delay recurrence. In this setting, a low dose (metronomic chemotherapy) of the anti-cancer drug is given regularly (e.g. daily or every other day), which minimises any side effects.

A therapeutic vaccine is available for the treatment of malignant melanoma to delay the development of tumour spread. This is used once surgery has been performed to remove the primary tumour, along with the lymph nodes if there is any evidence of tumour spread. Vaccine therapy is well tolerated, with almost no side effects, unfortunately this will not however result in a complete cure for a patient with malignant melanoma. Vaccine therapy is not used to prevent the development of tumours in animals that do not have a melanoma.

To assist owners in understanding more about Cancer Care we have put together a range of information sheets to talk you through the some of the more common conditions seen and treated by our Specialists.